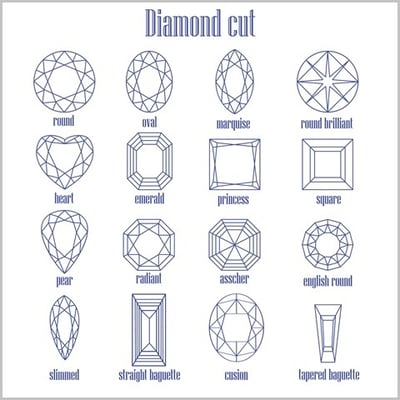 “Cut is the only diamond characteristic under human control, and considered by many to be the most important,” says diamondideals.com. Here’s a quick guide for you to explain to your customers why diamond cut is so important, and how the diamond cutting process works.

The cut of a diamond has three principal effects on appearance:

Brilliance – the brightness created by the white light reflections from the polished diamond. Diamonds that are too deep or too shallow often return less light and have less brightness. Brilliance is also dependent on contrast. Take for instance, a checkerboard. Even though it doesn’t have as much light return as, say, a white wall does, it looks brighter, especially when it moves.

Scintillation – the flashes of light and dark, or sparkle, when a diamond or light source is moved. It’s easy to see sparkle in floodlit environments, like the office, or when spot lit. It’s ideal for any diamond to have many sparkles across its surface and not dull patches.

“Even though it has less light return, a checkerboard looks brighter than a white wall because of the contrast between dark and light.”

Because these properties can create the overall first impression on a potential customer, they also have the most impact on the final sale. When showing diamond jewelry to your customers, make sure to point out the qualities of brilliance, fire and scintillation. 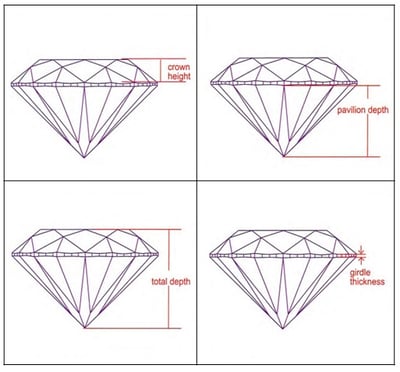 According to expert Akiva Caspi in “Modern Diamond Cutting and Polishing” (Gems & Gemology, Vol. 33, No. 2, p. 103), “The cutting process seeks to take advantage of the critical angle of total light reflection within the faceted diamond to achieve the maximum amount of light return through the crown facets.” It is the cut that gives the diamond its sparkle and shine, and there is a scientific process to determining how best to achieve this brilliance. The process involves four steps:

Round Brilliant – This is the most popular shape and can cost up to 35% more per carat than other shapes. The reason for this is two-fold: first of all, due to their popularity (approximately 75% of all diamonds sold) the demand for round diamonds is very high. Secondly, because more of the original stone is lost in the cutting of a round diamond than any other shape, the cost of each carat retained is higher.

Despite the popularity of the round diamond, you are certainly well aware that there are many different shapes for consumers to choose from in today’s marketplace. These other shapes are referred to as “fancies.”

Princess – this is the most popular of the fancy cuts, especially for engagement rings, since due to its many facets, it comes close to mimicking the sparkle and fire of a round diamond. The princess has pointed corners and can be square or rectangular shaped. The four sided pyramid shape is similar to one half of the octahedron rough diamond from which princess diamonds are cut. This allows two equally sized princess cut diamonds to be cut from the same rough stone with relatively little waste, effectively lowering the price per carat.

Radiant – like a princess cut, the radiant cut also takes on a square shape with many facets, however its signature feature can be found in its cropped corners. This makes the radiant cut very versatile and popular as it can be easily set with baguettes, square, or round diamonds on the sides.

Oval – this is a modification of the round brilliant with an added benefit that their elongated shape can provide the illusion of larger size. This makes them ideal for a customer that likes the look of a round diamond but is on a limited budget.

Marquis – this is a modification of the oval brilliant cut, long and narrow with two pointed ends. According to diamondtradingcenter.com, the name is derived from the Marquise of Pompadour, for whom King Louis XIV of France allegedly had a stone fashioned to resemble what he considered her perfectly shaped mouth.

Pear – also called a teardrop, this is a combination of the oval and marquis shapes, with one pointed and one rounded end. The graceful lines of a pear shaped diamond impart an elegant air to both the simplest and most elaborate ring settings.

Heart – this cut is a distinctive symbol of love, popular in solitaire pendants as well as rings. The heart shape is a unique symbol of love and very popular for Valentine’s Day gifting.

Emerald (rectangular) and Asscher (square) – these are distinguished by their pavilion, which is cut with rectangular “step” facets, along with a large open table that produces a hall-of-mirrors effect that many admire. According to bluenile.com, the large table highlights the clarity of the stone, so be sure to take that into account when choosing a stone of this type.

Cushion – also called pillow cut, is a square shape with rounded corners and larger facets, which increase brilliance. This is one of the earliest diamond cuts and due to modern refinements remains popular today with consumers who are drawn to its antique look. 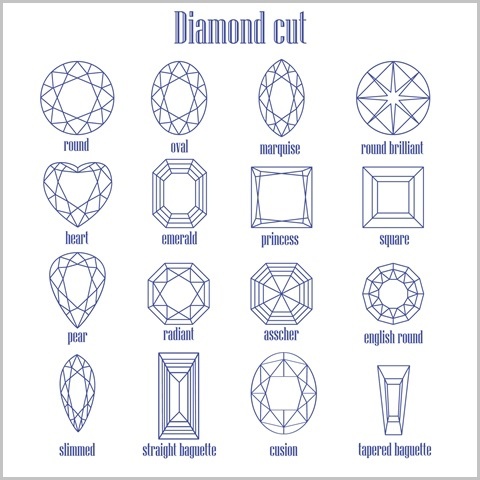 Learn more about diamond cut from our eBook "Guide to Diamond Cut: A Compilation of Articles."

The cushion cut has been around for nearly 200 years and was the de facto shape of diamonds until the early 20th century. The asscher cut diamond was first produced in 1902 by the Asscher Brothers of Holland. Asscher cut diamonds originally peaked in popularity in the 1920s, before being replaced by the round brilliant, which rose in popularity after the publication of Marcel Tolkowsky's thesis "Diamond Design: A Study of the Reflection and Refraction of Light in Diamond" which described the ideal proportions for a round cut diamond.

Oval diamonds were first cut by Lazare Kaplan in the 1960s and remained the cut of choice until the 1980s when the radiant and princess cuts were introduced by Betzalel Ambar and Israel Itzkowitz.

In 2002, the asscher began to make a comeback, prompted by cut modifications that gave the shape more brilliance than traditional asscher cuts.

As with all fashion and jewelry, diamond shapes follow trends, as certain cuts become popular and others fall out of favor. While round diamonds continue to be the most popular, there is a core group of avant-garde enthusiasts who prefer more unique and different shapes.

Two commonly used grading systems for cut are by the labs GIA and AGS. GIA classifies cut as: “excellent,” “very good,” “good”, “fair”, or “poor”, while AGS adds a category of “ideal” as the ultimate cut in terms of proportions and light performance.

What Does Cut Mean to Your Customers?

Most consumers are aware of how color and clarity affect the look of a diamond, since these factors are simple to describe and understand. However, cut is more complex to explain, and many consumers are not aware that cut is the highest contributing factor to the beauty and brilliance of a stone as it governs how much light is reflected from the stone. Poorly cut stones will leak light out the sides and back instead of reflecting it back to the eye of the viewer.

Cut is also a key determinant in the price of a diamond. Creating an ideal cut with greater sparkle requires extensive training, patience, and skill, and often necessitates carving off more of the original rough diamond. Lesser cut diamonds which have less sparkle will most likely be cheaper.

Being able to explain the diamond cutting process and its impact on a diamond’s brilliance is important when making a sale. If you as the retailer can help potential customers to appreciate the difference cut makes to the splendor of the diamond, as well as its value, then you might just be on your way to a successful sale.

The views and opinions expressed in this blog are those of the authors and do not necessarily reflect the official policy or position of Rapaport or any other Rapaport Group entity or service, its officers, directors or employees. Rapaport does not guarantee or warrant the accuracy or validity of any information presented by Rapaport or the views expressed therein.
Get a FREE 7-day trial of RapNet
Share:
Published: Jan 05, 2016
View all posts by: Debra Greenstein
Subscribe to
RapNet's Blog