The Promise of a Diamond: An Overview for Jewelers | RapNet 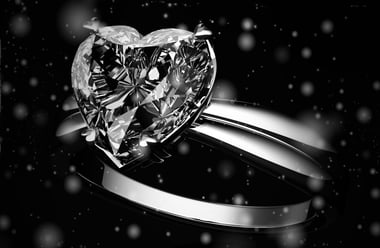 The diamond's promise is the essence of what makes it so special to consumers. The promise is at the heart of every diamond purchase and is what sets diamonds apart from other luxury goods. A diamond has meaning; it conveys emotion and is a symbol of love, elegance, beauty, and wealth. The diamond, because of its physical nature, stands for eternity, purity and innocence. When proffered, it expresses commitment, faithfulness, and trust. Delight and entertain your customers with these concepts and further garner their confidence in their purchase.

A diamond is made entirely from pure carbon, the foundational element of life, and the hardest naturally occurring substance found on Earth. The word "diamond" is derived from the Greek word “adamas," which means "unconquerable" – a reference to the diamond's unique hardness. This remarkable characteristic influenced the belief that diamonds are a gift from the gods, and that they impart strength, happiness, and longevity to their owner.

George Frederick Kunz, in his 1912 book, "The Curious Lore of Precious Stones," writes, "A legend claims the God of Mines called his courtiers to bring together all the world’s known gems: Rubies, Sapphires, Emeralds, etc., and he found them to be of all tints and colors and varying hardnesses. He took one of each and crushed them; he compounded them together, and declared, 'Let this be something that will combine the beauty of all.' He spoke, and lo, the Diamond was born…pure as a dewdrop and invincible in hardness. Yet when its ray is resolved in the spectrum, it displays all the colors of the gems from which it was made."

History and Symbolism Throughout the Ages

We tend to think of diamonds as having always and only signified romance; however, diamonds were not always just a promise of true love.

In Ancient Rome, they stood for courage, strength, and invincibility. Diamonds were known to and worn by the Romans. They were highly prized as ring stones. Furthermore, the 1922 book, "The Book of Talismans, Amulets and Zodiacal Gems" states, "The Romans also regarded the diamond with much reverence, fastening it upon the left arm so that the gem should touch the flesh, believing it powerful in making its wearer brave and daring, giving him the victory over his enemies; and when set in fine steel, was considered a charm against insanity.

In the Dark Ages, diamonds were also a promise of good health, as they were used for medicinal purposes. They were added to potions or given whole to the ill to consume. Often, those wounded or suffering illness were told to hold a diamond in the hand and make a sign of the cross for healing. Even today there is a belief in the promise of a diamond's healing properties. Some purport that adding rough diamond elixir to bathwater is effective for counteracting exhaustion. Others believe that raw diamond crystals bring clarity of energy to the individual body parts that they touch, and faceted diamonds infuse one's aura with a full-spectrum of light for strengthening and cleansing.

It was in the late Victorian Age that diamonds in jewelry became a common promise of status. Diamond jewelry was used for formal occasions, in the royal court and at state affairs. Rapaport Magazine article, The Dazzle of Victorian Diamonds, states that diamonds rose in popularity during the late Victorian Age due to the growth of and proximity to diamond mining. "Nineteenth–century England had a 'royal' connection to the diamond mines of the day, first from India and then, in 1867, from South Africa. It’s why there were a lot of diamonds in the jewelry of the late Victorian era. The British Empire controlled India, South Africa and Australia, and that’s where all the diamonds were coming from.”

More recent associations with diamonds go deep. The promise of a diamond has come to represent profound human emotion. Love, commitment, and romance are some of the first words that enter the mind when we think of a diamond. In a 2011 interview between Kim Kardashian and Elizabeth Taylor for Harper’s Bazaar, Taylor said regarding her famous and very large diamond rings and rocky relationships; “Size does matter, but so does the size of the emotion behind it.”

The diamond promise is also related to its unique physical strength and clarity. Because of this, the diamond also symbolizes power, brilliance, and matchless beauty. Diamonds represent a promise of forever. 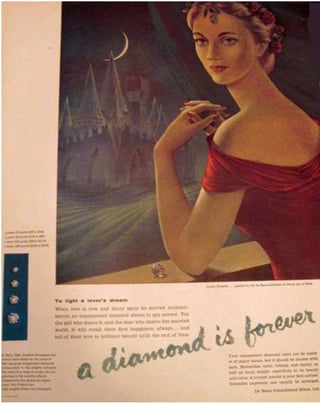 Today, diamonds are an integral feature of the engagement ring, mainly due to the 1947 DeBeers ad campaign “A Diamond is Forever.” The significance of the slogan is in the implied concept that just as a diamond is dear, solid, resilient and lasts forever, so too is the commitment of a groom to his fiancée. A diamond's purity and sparkle have become symbols of the depth of commitment between lovers. Read Martin Rapaport's article, "A Diamond is Forever," from 1998.

DeBeers followed up this piece of marketing with the suggestion that consumers cherish their diamond jewelry as family heirlooms, and so people began to hand down their diamond jewelry to their children and grandchildren, along with the stories of whom they were gifted from and to, further reinforcing the idea that diamonds are to be treasured forever as a link to past generations.

As opposed to other luxury goods and commodities, where price, quality, and resale value drive the transaction, a diamond is a highly emotional purchase. As a diamond jeweler you need to tap into that sentiment and connect with the customer on an emotional level. Leonard Zell, a self proclaimed authority in the area of jewelry sales training says, “You’re selling a memory, something to be cherished forever – and you have to connect with the customer’s emotions.” As a diamond retailer you are in the business of love. When people walk into your store they should feel positive energy, excitement, and of course, romance. The diamond buying experience should be a positive one, and keeping the focus on the romance will make it so.

Are diamonds forever? Among other things, Martin Rapaport says, "It depends on how we in the trade treat our customers. We must recognize, honor and respect the great trust and emotional investment that consumers put in our product."

A diamond piece is a much-coveted piece of jewelry, considered both a necessity and an indulgence. There are many occasions that can be marked by the gift or use of a diamond. Whatever the occasion, a diamond is treasured not just for its worth, but for its promise.

The views and opinions expressed in this blog are those of the authors and do not necessarily reflect the official policy or position of Rapaport or any other Rapaport Group entity or service, its officers, directors or employees. Rapaport does not guarantee or warrant the accuracy or validity of any information presented by Rapaport or the views expressed therein.
Get a FREE 7-day trial of RapNet
Share:
Published: Dec 08, 2015
View all posts by: Debra Greenstein
Subscribe to
RapNet's Blog