Why It's Important to Avoid Diamonds From Zimbabwe 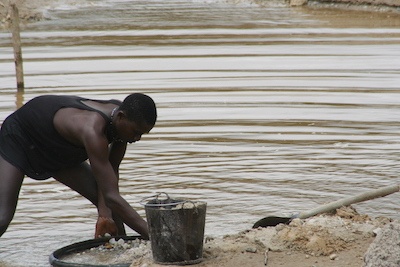 Many of us have heard that we should avoid buying diamonds mined in Zimbabwe. This is because they are considered “conflict diamonds” or “blood diamonds” because of the legal and ethical issues involved. Why is this so?

What are Marange Diamonds?

In 2008, large quantities of diamonds were found in the Marange area of Zimbabwe, and geologists estimate that this deposit, covering 300 square miles, may be the largest diamond find on Earth.

The Zimbabwe government took over the Marange fields in 2010 and they have partnered with a number of private companies that employ around 10,000 miners. But the situation is not good. There have been regular reports of diamond workers being raped, killed, tortured and abused by government security forces. There are also allegations of corruption and profiteering, smuggling and illegal mining by the local mining companies. These actions are obviously not acceptable, and we can put an end to this by addressing the sale of these diamonds.

The Sale of Marange Diamonds to the International Market

The Kimberley Process started when Southern African diamond-producing states met in Kimberley, South Africa, in May 2000, to discuss ways to stop the trade in "conflict diamonds" and ensure that diamond purchases were not financing violence by rebel movements and their allies, seeking to undermine legitimate governments. The Kimberley Process Certification Scheme (KPCS) prohibits its participants from trading with countries such as Côte d'Ivoire and Venezuela that do not comply with its supervision process. In December 2010, there were calls from NGOs to add Zimbabwe to this list, in light of the government’s violent takeover of the Marange diamond fields. But instead, the Kimberley Process organization agreed to a monitoring plan with Robert Mugabe’s government and allowed Zimbabwe to export its rough diamonds into international markets.

KPCS allows diamonds from Marange to be sold as conflict-free because their mandate does not cover issues of human rights abuses. Major rough diamond auctions took place in Harare in 2010 and in Antwerp in 2013 and 2014, after the Belgian diamond industry persuaded the European Union to lift its sanctions on Zimbabwean diamonds. It is estimated that over 1 million carats of Marange diamonds have entered the international market in recent years for polishing and resale.

The Position of the USA, the UN and Leading Members of the Diamond Industry

The United States government has imposed sanctions against the Zimbabwe government because of its human rights abuses so, despite the Kimberley Process allowing international sales of these diamonds, the USA and its citizens are prohibited from buying or selling them. All American companies that buy, sell, and ship rough diamonds must submit an annual report to the US State Department giving a detailed breakdown of the sources, total carat weight and value in US dollars of the diamonds that they have imported, exported, and stored. Strict penalties for non-compliance show that this issue is taken very seriously by the US government.

The UN Guiding Principles for Business and Human Rights (UNGPs) make it clear that “companies have a responsibility to make sure their activities do not fund harm and abuses.” The respected NGO, Global Witness, recommends that all companies involved in the diamond trade should implement risk-based due diligence to ensure they are not buying conflict diamonds. The World Diamond Council has called for a clampdown on smuggling of diamonds from Zimbabwe. Furthermore, the Rapaport Group and RapNet continue to enforce a ban on the online sale of diamonds from the Marange fields.

Industry spokesman Martin Rapaport urges dealers to avoid trading in Marange diamonds and to join the international campaign to boycott conflict diamonds. He says “The Kimberley Process is being used as a fig leaf to cover up human rights abuses in the diamond sector."

There has been an increase in consumer awareness of conflict diamonds since the release of the blockbuster movie, Blood Diamond, in 2006. Although set in Sierra Leone, many of the same concerns about exploitation and the violent abuse of miners also apply in Zimbabwe. Since diamonds represent love, consumers are understandably uncomfortable with the idea that blood may have been spilled, vulnerable people abused, or laws broken in order to bring them their diamond.

Martin Rapaport says, “Diamonds symbolize love, commitment and all that is good in the world. Jewelry and diamonds are very much 'feel-good' products, and therefore highly sensitive to anything that would destroy their value as symbols.”

Because the leaders of the international diamond industry have failed to enforce ethical standards from the top, Rapaport has been leading a grassroots campaign within the diamond industry. He calls upon all industry participants to look out for and try to prevent the sale of Marange diamonds, in order to protect the integrity of their product, their reputation, and the reputation of the industry as a whole.

How to Recognize and Avoid Buying Marange Diamonds

It helps that many Marange diamonds are uniquely identifiable. They resemble gravel or rounded pebbles in a river bed and range in color from dark brown to green. You can read more about their unique identifying characteristics in detail in a Footprint of Rough Diamonds From Marange Diamond Field.

Polished diamond buyers should inquire carefully about the source of any diamonds that they are offered in D to Z hues with a faint green color (which are quite different from green fancy color diamonds). While not all Marange polished diamonds have a greenish hue and not all green hue diamonds are from Marange, significant numbers of these tainted stones are appearing on the market.

The easiest way to avoid Zimbabwe diamonds is to know your supplier and to ask them to guarantee that the diamonds are not from Marange. Ask them to sign an undertaking and to agree to provide a refund if laboratory tests reveal that the gems they have sold you are in fact conflict diamonds. You have the right to return them – a legal right within the United States, and absolutely an ethical right. Taking a stand on this issue sends a message back up the supply chain that consumers do not want blood diamonds.

Why it Profits to Not Sell Marange Diamonds

Increasingly, purchasers are asking about the source of the diamonds that they are offered because they prefer not to buy conflict diamonds. That is why it is in your interests as a dealer to inquire into the origin of every diamond that you are considering buying because it may be illegal. Your reputation as an honest dealer could be affected if you were known to be trading in Marange diamonds from Zimbabwe, and you may also have problems selling them online, since RapNet and other reputable websites will not allow their sale.

As Martin Rapaport so eloquently says in his article titled After Kimberley…Now What? (June, 2011), “...with proper marketing consumers are willing to pay more for ethical jewelry. Free competitive market forces will ensure that suppliers and jewelers develop a cor­rect cost-benefit ratio for ethical jewelry, and society will get the exact level of social and ethical responsibility that it is willing to pay for. In the end, business is about making money, and so is doing the right thing."

The views and opinions expressed in this blog are those of the authors and do not necessarily reflect the official policy or position of Rapaport or any other Rapaport Group entity or service, its officers, directors or employees. Rapaport does not guarantee or warrant the accuracy or validity of any information presented by Rapaport or the views expressed therein.
Get a FREE 7-day trial of RapNet
Share:
Published: Oct 13, 2015
View all posts by: Saville Stern
Subscribe to
RapNet's Blog